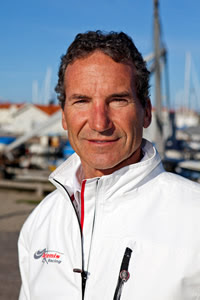 As CEO of a Swedish America's Cup team that's currently based in Valencia, Spain, because that's where its critical mass of designers live along with primary designer Juan K., Paul Cayard, CEO Artemis Racing (SWE) isn't spending too much time on his home shores of San Francisco Bay. He cites having a team scattered around the world as just one challenge of the next America's Cup, but probably less so than the ultimate challenge - racing AC72s on San Francisco Bay:

"It doesn’t take a brain surgeon to figure out that the handle-ability of this seriously over-powered boat which is under-crewed on an extremely short course in the windiest venue in the world - you multiply all that together and you have a fight on your hands."

Meanwhile, he's upbeat after the first of the America's Cup World Series events.

What was your take home after these past three events?

If you look at the skill level and the speed, Artemis Racing has it - they just need to work on the consistency a little bit. What separates Oracle and Team NZ right now is that they’re a little more consistent with their performances and we need to strive to attain that level of consistency.

To be fair to Terry and the guys, strategically as a team we decided to rotate the crew and that’s something ETNZ absolutely doesn’t do and Oracle hadn’t much but for example, in San Diego when Darren Bundock steered - he’s a very accomplished multi hull sailor - and had trouble also. It’s not that easy to move people around. That maybe something we don’t do as much of next year. We do now have a second AC45, which is a different way to get the crew the exposure so we can have 10 guys sailing without having to rotate crew and we’ll start doing that in January. But we now have eight people with experience and in some ways we'll be a little wealthier for that experience.

* Artemis has 13 sailors on the Team, including new hire Chris Brittle who came over from Team Korea. Cayard plans to steer their new AC45 for a bit in February before turning it over to alternate helmsman Santiago Lange. They’re on schedule to launch an AC72 July 1, 2012, with molds built and soon ready for lamination.

Has the investment in the World Series been worthwhile?

The events are very useful for promoting the America’s Cup. The teams need a road show - what’s the road to the America’s Cup? Where are the teams? What’s the visibility? How do they get the sponsors? So, having a circuit that’s identified that the teams and sponsors can count on and that the public can watch on the internet, on TV or in person, all that is part of building the fan base and creating a bigger value in 2013.

To walk into 2013 cold especially after the 33rd America’s Cup which wasn’t particularly glorious in our history, I’m not sure spending any amount of money on the finals would have done as good a job as the World Series will do. It’s a difficult time. The economy is what it is but the America’s Cup was handed over in a pretty difficult state between the lawsuit and the boats racing two races - that was fairly pitiful - it was a low point in our sport and this event. To build on that and to create a product that can really win the fans back to sailing is a big challenge.

There’s been some money that didn’t need to be spent but things are going to be trimmed back. But the concept of a road show to help all the teams and the event build value and get fans and sponsors therefore interested again in the America’s Cup is necessary. I think they’ve been top-shelf events, from the hospitality to the event side with lots of activities at night. It’s a lot more than just the racing. The television product is very enhanced over anything we’ve ever seen before. The races are shorter and the 25-30 minute format is great. Exactly what detail and level of expenditure should be consumed is what is being fine tuned right now but to say we’d be better off without it at all is not true.

Anything on the racecourse you’d improve?

For the racers, they’re pretty happy with things. There could be a few questions from a marketing standpoint as to the blend of match racing versus fleet racing - I think the public really likes the fleet racing, it’s really exciting - it’s a little more NASCAR-ish - you have more passing so you may find a bigger blend of fleet racing than match racing but obviously the America’s Cup in the end is a match race so there’ll be an element of match racing that stays with the event. Just tweaking like that. Artemis is happy with the racing and looks forward to 2012.

Shifting gears, what’re your thoughts on the current status of the Volvo?

They’re doing a good job within the reality of what we’re living in right now, same thing with the America’s Cup. It’s having trouble with entries too. The world economy is what it is and I’m sure all sports sponsorships are getting squeezed. The Volvo’s had its teething problems on the first leg, we had the exact same thing when we did Pirates when everybody was thinking the world was going to end because on the first two legs keels broke and then everybody was basically good until Telefonica sank. They’ll have a good race, the boats are closer than they ever have been in competitiveness so hopefully they’ll have some great battles. The in-shore races are good - I watched that myself the other day on the internet and I think there’s good value there.

You were recently inducted into the National Sailing Hall of Fame - what’s been your most personally satisfying achievement?

Probably Pirates of the Caribbean (Volvo Ocean Race 2005-6) because the hill was the steepest. Talk about being under the gun. I met with the organizers just six months before the race started and it takes eight months to build one of those boats, not to mention that the keel almost fell off on the first night and that we had to finish building the boat in Cape Town. I know the meaning of that and the uphill battle it was, I lived it and I’ve lived the other achievements as well but outwardly it’s probably hard for other people to see that.

What would you do differently if could have your career over again?

I’m sure there are things but I haven’t really dwelled on that. Looking forward though, I’d like to win the America’s Cup. I’ve been in the finals twice, I’ve won the Louis Vuitton Cup and have pretty much knocked on the highest door without winning the Cup so that’s what I’m looking forward to now, that’s my project and my passion, that’s where I’m investing myself. I’ve still got plenty I can achieve in the sport and I’m working on it.