GOT YOUR LEIS LOADED? Countdown to Pac Cup 2012 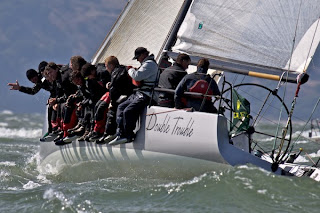 46 boats racing in the 17th edition of the Pacific Cup will leave from the San Francisco city front (off the St Francis Yacht Club) at noon on Monday July 16, sailing under the famed Golden Gate Bridge to Kaneohe Bay, Hawaii. The 2070 nautical mile race runs every even year.

A staggered start from July 16 through July 20 will see the slower boats take the line first, followed by the rest of the fleet throughout the week. Even so, an early start may not be enough of an advantage for the slower boats.

Andy Costello, skipper and owner of the very competitive J125 Double Trouble, is racing Pac Cup for the first time and has taken a glimpse at the long range forecast, “We’ve started to look at the weather and it’s looking better for our start later in the week than it is for the earlier starts, so that may help us get to Hawaii faster.”

Like Costello’s going to need much help, stacked as his boat is with accomplished Hawaii racers, including Skip and Jody McCormack, Matt Noble and Trevor Baylis. Nonetheless, Costello’s playing it cautious after a disappointing experience in last year’s Trans Pac race. After months of ocean prepping Double Trouble, just three days into that race something broke that he never thought would break. They had to turn back.

“The issue was totally unexpected so we decided it was best to go through the whole structure of the boat this time to make sure it wont happen again,” Costello said.

As for most Pac Cup racers, the preparation - both boat and crew - is daunting. “It’s been a six month project,” Costello said. “We’ve double checked, modified, strengthened the boat, found new ways to get weight off the boat - we’ve done a lot but when you sail with crew like mine, they really prepare.” 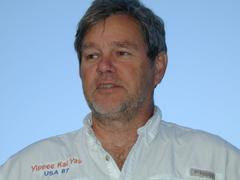 Even veterans like 8-time racer Jim Antrim agree that preparations are endless. Antrim’s racing on California Condor, an Antrim Class 40. “It’s just an awful lot of work to prepare, no matter how you feel like the boat is ready. It just goes on and on. Just a couple of days ago we had the boat at a fuel dock at Berkeley Marine and a guy came in, broke his tiller off and t-boned us. The damage wasn’t too bad but it was just one more thing.”

Antrim and crew raced California Condor on her maiden Pac Cup race in 2010, but had a miserable time after the rudders broke, limping to the finish after a few days of sailing with a drogue and jury-rigged rudder. He’s hoping for better success this year although he’s disappointed with their rating.

“My expectation is that Double Trouble will win our division. Our rating is harsh and theirs is good. Their boat is also really well sailed. Medusa (Santa Cruz 52) has some really good people on it. They may do real well also,” Antrim said.

A big change this year is that race boats will be able to make their daily position reports by email, text message, or phone call using a satellite phone to a central number, rather than SSB. Organizers have also engaged Yellow Brick, a position tracking company new to Pac Cup. 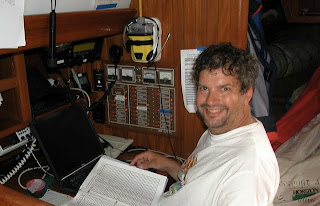 This year’s fleet is a tad lighter than usual but Pacific Yacht Club staff commodore Michael Moradzadeh says it’s not a bad thing. “46 is a good crowd - you end up with a richer community experience because the group is manageable in the space that we have.”

Known for it’s appeal to the racer/cruiser crowd, Pac Cup numbers are up this year in the “mom/pop” entries, and lighter than usual in the more serious racing crowd, says Antrim, a member of the race technical committee and ratings chairman.

Two of the bigger entries are Andromeda, the Swan 59 skippered by Antonio Luttmann (Mexico), and Icon, the Perry 66 skippered by Ian Sloan. Taking up the slack on the other end of the scale is Moonshine, a Dog Patch 26 double-handed by Dylan Benjamin and Rufus Sjoberg, the Express 27 Magic skippered by Mike Reed, and the Antrim 27 E.T., skippered by Tony English.

The Skippers' Meeting is on July 14, 2 pm, at the Berkeley Yacht Cub, followed at 5pm with the Bon Voyage party.

For information on the 2012 Pacific Cup and race tracking, visit: http://pacificcup.org/

Posted by Michelle Slade at 4:56 PM