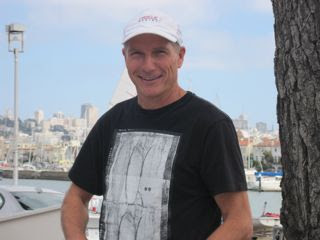 An invitation-only fleet of 32 competitors will face off on a course close to the beach designed to force quick decisions.... as the event touts, “good people go bad in conditions that would never otherwise trip them up.”

The fleet is stacked with talent including LaserPerformance Ambassador and Team Maclaren skipper Anna Tunnicliffe, Olympic Gold Medalist and US SAILING’s 2010 Rolex Yachtswoman of the Year.

Also competing is Oracle Racing’s Scott Ferguson, winner of the ‘09 and ’10 Laser Masters World Championship. SailBlast caught up with Ferguson as he was getting ready to hit the water on Saturday afternoon at St FYC to spar with fellow Oracle design team member Dimitri Despierres.

Ferguson, from Jamestown, RI, has just this month moved to the Bay Area with his wife Kim to be closer to the Team’s HQ. He’s been involved in Cup campaigns since first working with Dennis Conner in 1995, as well as Italian teams Luna Rossa and Prada. He managed the mast and wing design on USA-17, followed by the AC45 wing, and is now working on Oracle’s AC72 wing program. Ferguson's also worked on numerous other big boat programs including TP52s and the Volvo Ocean Race.

But this week he has his sights set on the Laser 4.7 and getting around the slalom course without crashing...

SB: Why the Laser Slalom?

Ferguson: The Slalom is something I’ve heard about forever - 30 years ago I remember hearing about San Francisco and this event that goes on out here, it being really windy and people used to wrap their sails twice around the main spar to reduce sail area and stuff like that (LOL) and so it’s always had this lure. I heard about it, timing is good because I’m now here so so I have to do it just because it’s such a unique regatta. I like the boat handling - a lot of tacks, a lot of jibes - I hope I’m pretty good at that (LOL).

SB: What are your expectations?

Ferguson: As far as the event itself goes, I don’t really know what to expect. I know the format - that we’ll be right up alongside the beach here. I guess I’ll just take what I’m given, try not to capsize, and make the maneuvers as smooth as possible. The scary part is that you normally get to pick your points to jibe but with the slalom you’re kind of forced at times - you have a fairly small window within which to jibe and if you hit the waves not quite right you could get into trouble!

Ferguson: LOL! It’s all good! I am surprised at how cold the water is here but you get the right gear and it’s fine. It’s kind of refreshing.

SB: How long have you been sailing Lasers? Ferguson: I sailed Lasers a lot when I was in my late teens early 20s, then got out of it for 25 years or so, sailed J24s and big boats but mainly just for work. Then got back into it in 2003 with my old boat, my 1983 old white squishy deck water logged boat and got into some larger events on the east coast and realized I needed to get a new boat. I bought the new boat in 2004 and steadily ramped up. I’ve done five Master Worlds since, winning the past two years (England 2010, and Nova Scotia 2009).

SB: You can’t be too shabby at this then?

Ferguson: I love the Laser, it’s just good exercise for me, I love going out on the boat, it’s like going for a bike ride. The events themselves force me to stay healthy and lose weight so I really like it from that perspective. It’s also a very challenging boat tactically and it’s athletic so it’s fun to sail. It’s a great boat to learn on, plus it’s great to have the ability to be able to get on a boat alone and not be dependent upon anybody else. And - they’re doing this with the 4.7s - you put a smaller rig on the same boat and it’s a great one design, as long as you have a lot of other boats to sail against. It’s fun and hopefully gets more kids involved in sailing.

SB: How often do you get in the boat? 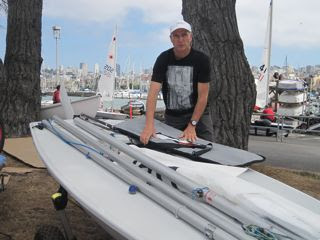 Ferguson: Leading up to the events I try to get out every other day but with work - I’m pretty busy with what I’m doing - so I’ve been getting out perhaps twice a week or so, and more and more as this event gets closer (he’s rearranged a few meetings to be able to race this week…).

Ferguson: It is double duty! It’s interesting because it’s such a unique place to sail. I thought it was going to be a lot more of being really windy the whole time and straightforward but it’s very puffy and the current is very different all the way across from here to the other side. It’s a challenging area to sail I think.

ABOUT THE LASER SLALOM:
Bill Kreysler, PRO for the event explains: “The Slalom works this way. Two parallel rows of buoys are laid to windward of the starting area. Two sailors start one-on-one, each luffing nose-to a left side or right side bottom-most inflatable mark. It is the sailors' job to hold position as best they can until the race committee sees that both are nosed-up evenly (enough). Then a start is signaled. The challenge is to tack up through your row of buoys, cross sides at the top (no hunting allowed), gybe down through the buoys, beat back to weather, cross again, and hurry-up gybe to a finish at the bottom. It's an eliminations ladder, so winner advances.”

America's Cup In the Community 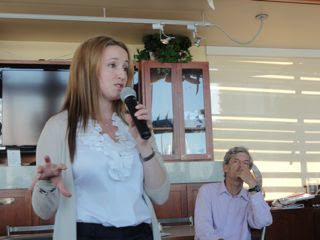 As part of the Host City Agreement (HCA) with the City of San Francisco, the America’s Cup Event Authority (ACEA) has a responsibility to develop a Youth Involvement Plan to be implemented in the City, as follows:

The Bay Area’s sailing advocacy group, GoSailingSF.org, recently invited Ariel Ungerleider, ACEA’s community outreach manager, to translate for its membership exactly what this all means, and to give an update on where her team is at in fulfilling this commitment to the City. Ungerleider, who is from San Francisco, is new to the sport of sailing but comes from the world of sports marketing, non-profits, sports non profit and has worked youth programs in other sports.

The good news for local youth and community sailing groups is that Ungerleider and her group are still in the early stages of defining what the City would like to see happen and what the Cup can bring to youth/community sailing. “The conversation is just getting started and we’re absolutely open to suggestions - we’re still creating our program,” Ungerleider said. “I would like to be able to offer more concrete ideas but I think it’s also a great starting point to say we don’t have an event in San Francisco for a year so we have a lot of time to plan and work with the community.”

She added that partnering with existing organizations is a goal, “We don’t want to reinvent the wheel, we know there are already great existing programs all around the Bay Area.”

While the Youth America’s Cup will be focused on older “kids” using the AC 45s as a pathway for the 18-21 years + age group to higher level sailing, Ungerleider hopes the Cup will provide access and opportunities for all kids from all walks of life to see the actual America’s Cup boats as well as meeting some of the athletes and learning about the event.

She’s been meeting with the San Francisco Mayor’s Office to better understand what education outreach means to them per the HCA, and how the America’s Cup can work with schools or after school programs like the Treasure Island Sailing center and the Sea Scouts as well as adult education - teaching adults how to sail, about the history of the maritime industry in San Francisco for example.

“We’re letting the city drive the conversation right now,” Ungerleider explained. “Once there’s a direction we’ll look to the programs that exist and the conversations we’ve been having such as this and offer a platform to help people find some of the organizations that are out there.”

Ungerleider said initially programs will be limited to the City because that’s whom ACEA is responsible to under the HCA. “Once that’s fulfilled, we’ll eventually include the greater Bay Area. In some cases there may be an opportunity to have a national footprint with classroom curriculum.”

She’s guessing she’ll have a solid plan in place later this fall, perhaps early November. Meanwhile, as we know, there’s no money at ACEA to offer up to local youth sailing/community groups but Ungerleider said on a basic level she’s able to offer assistance with merchandise or “guest” sailor opportunities to help drive fundraising efforts. She can be contacted at ariel.ungerleider@americascup.com.

* World-class sailor and philanthropist Dawn Riley, Executive Director at the Oakcliff Sailing center in Oyster Bay, NY, reminded Cup fans at the Golden Gate Yacht Club’s Cup Chat event that it works both ways when it comes to leveraging the opportunity that - hopefully - AC34 will bring to sailing:

“There’s a huge opportunity here that can not be missed and you guys all have to stand up and fight for this. There’s an opportunity to take what we were trying to do with America True to make sailing more accessible. With the America’s Cup you can have a program from K through 12 where everyone learns about the America’s Cup at their age level, from pirates in second grade to biology in 9th grade. The sailors are more than happy to go into the schools and do outreach and talk to the public and to these kids. You can’t let the Cup be here then go away and have everybody say, ‘Oh yeah, that thing.’ It has to be something that has a legacy a facility down at India basin, it’s a huge opportunity and this is the group that has to fight for that.”