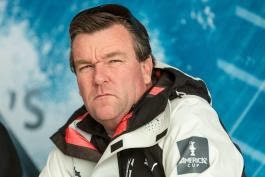 It's just two weeks until the event that’s all too often touted as the pinnacle of our sport, and the organizers still don’t have a permit from the Coast Guard to run the show. Following Artemis’s fatal capsize last month, safety recommendations (all 37 of them) expected to mitigate the risk of another tragedy have been submitted and attached to the Coast Guard’s permit. Not surprisingly, however, not all the teams are agreeable to the regulations being proposed.
Over the past two days, arbitrators have attempted to mediate with the teams--both as a group and individually. If agreement is reached, the regulations will be adopted into the Class Rule and the Protocol. But as PRO John Craig notes, if the “sticking” points cannot be resolved among the teams, the matter will be turned over to the International Jury. From there, it’s anyone’s guess as to the outcome.
When will the saftey regulations be published and a permit executed by the Coast Guard?
JC: There may be one or two sticking points that we can’t get around. Changing a Class Rule requires all four teams to agree to it. A Protocol change requires a majority and so that’s a little easier. If we get stuck, it may end up going to the Jury to make a determination, but once that’s done we would look to attach the Jury’s recommendations with the permit. But basically they would be small tweaks--the majority of the teams are in agreement with the new safety regulations.
Can you elaborate on the “sticking” points? Do they involve modifications to the boats?
JC: One of the examples in the safety recommendations is to make symmetrical elevators on the rudders. The elevators are lifting wings on the rudders that you can’t adjust, and they are currently asymetrical because they can’t go outside the beam of the boat. So you have one lifting elevator that’s shorter than the other. Iain Murray’s recommendation was to increase the size of those, and you could make them symmetrical and the same size. Some of the teams are saying, “We’re happy with where we are, we don’t think that’s a change we need to make.” Maybe the negotiation is just to make them a little bigger because the bigger they are, the more stable they are.
When changing something seemingly small like that, there must be a ripple effect that requires other changes on the boats?
JC: It does, and it doesn’t. We’ve got a lot of sailing in July that the teams will use to train and sail. If the regulations are approved and adopted by all the teams, there’s still time to develop further in July before we move into priority racing time.
With Artemis out until late July, the competition for July has become more of an extended training time?
JC: Yeah, but it’s still got value. The winner of the round robin in July will get the opportunity to choose to go either into the semifinals of the Louis Vuitton or right into the final. For the matches where Artemis is not there--possibly through late July--ETNZ and Luna Rossa will use those as training days. It’s not what we were looking for, but I think it’ll still prove interesting. I wouldn’t be surprised if Luna Rossa and ETNZ decide on one of those days Artemis is still out to invite the “other” team on a friendly “let’s go practice” type deal.
What else do the new safety regs cover?
JC: There are three sections that involve Class Rule changes, Protocol changes, and Racing Rules of Sailing changes. For example, changes to the Class Rule include increasing the weight of the boat. When the box rule was first created, the architects of that rule never envisioned the boats to foil, and the designers have managed to make that happen. As a result the structural loads have gone up significantly because the boats are getting lifted out of the water. One of the regulations Iain put forward is another 100 kg of weight that could be added to the boat for structural purposes to increase the structural strength around the main beam and around the load cases for the foils. Another recommendation was to make the farings clear or opaque so that you can see through them, making it easier to find somebody if they’re under the water.
A Protocol change is that, in July, the wind limit will be 20 knots, and that wind limit is taken 30 seconds over a 30 second period for 15 minutes before the start. It’s also tide-adjusted. [Craig notes it’s a little technical and makes reference to Regatta Notice 185 on the AC website.]
Other recommendations require two rescue divers--one on each of the team chase boats, and allow the team chase boats into the race area during the racing to follow the boats closely. There’ll be a paramedic on board one of those rescue boats. We’ve increased the certification of some of the personal gear, the helmets, and we’ve also developed two systems: One is a flashing strobe light that the guys wear on their lifejacket which is extremely high powered--Stan Honey and our technical gurus developed it--to make it easier for divers to locate people underwater quicker.

We’ve also developed another system in the event that all the guys go into the water; it’s like a key fob you have in your car. If they’re safe, they click it, and the response shows up on a display on the rescue boat to say he’s OK. If guys don’t respond, we’ll know who we’re looking for and what position on the boat they were at. Another big one is a move to soft marks. The VIP mark boats that we used to use saw the race boats go around the VIP mark boat itself--the teams will now go around a soft mark.

Much of this drama plays out in your jurisdiction - on the water. What have you had to adjust on the racecourse to mitigate the risk of a capsize?
JC: As far as the racing for this summer, we’re doing what we can with boundaries and creating safety zones or larger buffer zones between the race track and the spectator fleet. It is going to be challenging to get these guys around the track, that all being said, Luna Rossa and ETNZ have almost 20 days of racing together in some pretty windy conditions, so I think when we get to go, we’ll see what the boys can really do. I think it’ll start out slow, and it’ll build. When we get to the Cup itself, the racing will be pretty spectacular.
We’ve looked at wind limits; the scary part is 20 knots of breeze and 3 knots of ebb is a lot different than 20 knots of breeze in a flood. Fortunately the way the schedule has worked out, a lot of the regatta is in a flood, so while unplanned, that’s been a good piece of luck. With the wind limits, boundaries, and run-offs, there's also all the other stuff that we’ve done as far as the rescue side of the equation. After Oracle capsized, we required the boats to put 1000 liters of air in the top of the wings so a lot of the teams have come with either an air bag on the top: When it blows open, it stops the mast from going deeper in the water. Others have actually put airbags inside the wings themselves. We’re hopeful that will reduce the damage if we do get into a situation.
From your observation, what could be changed on the boats to tame these beasts?
JC: We originally started out with two wings--the larger one we’re with today, and a small one. The bigger one was based on the lighter air venues that we thought we would sail with the 72s in the second leg of the America’s Cup World Series, which didn’t happen. I think if you polled the teams now they might suggest the smaller wing was a wiser option, but again at the time we didn't see foiling, and the boats were supposed to do the 2013 ACWS series leg when that decision was made.
Have you tested the new boundary system? JC: Today is our first day with the boundaries up so we’re going out to test that today. We’re pretty confident that we’ll be able to get the buffer we’re after. During the review the sailors commented that they needed 45 seconds from the edge of the boundary to the spectators if something went wrong, so that’s what we’ve been trying to create: 45 second run-offs around the course so if the guys get into trouble they have a place to go.
As PRO, what’s been the most challenging aspect of AC34?
JC: Working through what these new boats have created. We were thinking they’d do 33-35 knots, and they’re now doing 45-46 knots. By foiling and by the designers being as smart as they are and getting the boats to fly/foil, this has changed what we thought we’d be dealing with. The most challenging part of that has been adapting racecourses, safety, working with the Coast Guard, and the teams getting to a place where everybody is comfortable so that we can race these boats but can also ensure a good show that works for all the components outside the racing. As we’ve changed the racecourse, times, and wind limits, that’s also had a trickle down to the commercial side of it. The interface with all of those bodies as you make a decision is a lengthy process--it’s a lot of time.
Once racing starts, what will your specific role be? Where will you be?
JC: I’ll be back to running the races on the water--out of board rooms and meetings and running races, which is what ACRM is all about. I’ll be on the signal boat and monitoring the wind very closely to make sure we stay within those wind limits. If it looks like it's not going well, guys are in trouble, or conditions change, I can be ready to call it.
After all this, running the Kiteboard Course Racing NA’s a few weeks ago must have been easy? 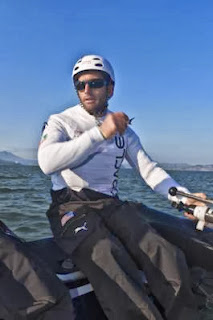 BA: It’s a completely different style of sailing, but what I’ve learned in small boats: It's just about hours on the water and trying to become good at making decisions about what’s working and what’s not. It’s the same as what we’re trying to do here with the 72s as we develop these boats as quickly as possible. It’s really about having good people and making the right decisions. Even in Olympic sailing, it’s not really about one person [laughs]--there tends to be a big team in the background helping out. The Cup is just a much bigger scale.
Posted by Michelle Slade at 12:51 PM 0 comments