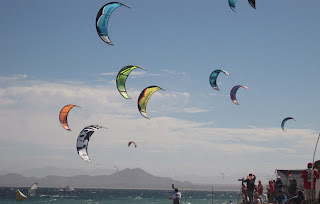 A few years ago, I got the bro’ deal from my friend Bruce Peterson, owner of Sailworks, on a new sail to take to Baja. The new 4.7 would be the biggest sail in my Baja quiver so I could windsurf those lighter days.

Of course I could go kiteboarding on those light air days in Baja and not bother with another windsurfing sail. But, I’d tried kiting and it scared the crap out of me - I couldn’t get my head around something flying on the other end of 75 feet of line that I was also hooked into.

The 4.7 went to Baja where it sat for an entire winter season, still wrapped in its newness. The wind was light all season and it seemed I needed even a bigger sail if I was going to ever get on the water. When a friend’s 60-year old mother started ripping it up on the waves at North Beach and someone else’s girlfriend was riding waves after her first lesson, (ok, later I found out she was a pro surfer), I felt seriously left out.

So, I went back at it. I became obsessed. Between Baja, the Gorge and Maui, I threw money and time learning to kite, sacrificing my feet to nasty rock and coral beatings, and my nerves to hell. And, that 4.7 went back to Bruce. He called the other day to say it sold.

Cool. Now I can buy another kite…

I can honestly say that I don’t have plans to rig another windsurfer, perhaps ever. Kiting is so easy: rigging is quick, there’s no heavy gear to cart around, nowhere near as much time is wasted waiting for wind, and out on the water, it’s just plain way more playful.

So, when the news broke last week that ISAF had replaced windsurfing with kiteboarding for the 2016 Olympics in Rio, I wasn’t at all surprised. Being around the sport over the past few years it seems like a natural progression of its popularity. Yet, it’s not a decision that all kiters are crowing about, contrary to what many windsurfers may think. 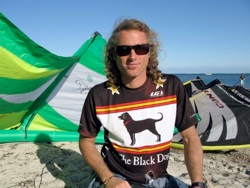 Mike Gebhardt, a former pro windsurfer for twenty years and an Olympic medalist who represented the US in windsurfing at five Olympic Games has been kiting for the past 8-9 years. He and a few others have been the force behind the push for kiting in the Olympics since 2009, nonetheless he’s still saddened by the departure of windsurfing from the world’s most elite sporting competition.

“I’m the first guy who would love to see windsurfing stay in the Olympics, it’s my legacy,” Gebhardt said, “I’ve literally dedicated my whole life to windsurfing. It has incredible participation and it’s got infrastructure but … really only in France, NZ, England and China. It’s non-existent in the US.”

Gebhardt thinks it’s now up to the windsurfers if the sport will grow or shrink on the bigger level but meantime, he’s got a pretty mean argument as to why kiting is the choice for the 2016 Rio Olympics.

“In less than 10 knots we own the sport of sailing,” Gebhardt claimed. “In 4-5 knots, if I put an 18 meter kite up on a longer line set and the latest greatest race legal production registered IKA board (there’s at least 10 companies making them), I have the right fins on it, and I’ve trained and have good/efficient technique, I’m planing in that wind and doing more than 12 knots upwind speed, reaching more like 18-20. There’s no other craft on the planet that’s doing that including $50 million America’s Cup winged catamarans.” 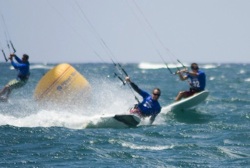 “I knew as a professional windsurfer and understanding the politics of sailing, that the only way kiting was going to talk to anybody at the Olympic level was to get racing going,” Gebhardt said.

He continued, “If you look at our evaluation report from the Trials, you’ll see it’s heavily influenced by me trying to push the sport to be as hard core as possible, including jumping on the races, short track racing, the final has a reaching start, there’s only four guys in the final etc. We did a lot of really cool shit in our testing and development of the courses, most of which we’ve run - a few were experimental but we’ve tried them and they’re cool.”

At the Trials, the worlds’ top 12 guys and 6 girls showed up and did nothing but test racecourses in breeze that varied from 4 to 22 knots. On the final day of testing, the breeze was six knots with puffs to eight. For those who argue that kites aren’t suitable for racing in light air, ISAF officials witnessed first-hand that they absolutely do just fine in light breeze.

“It was outrageous,” Gebhardt said, “The team sailed for two hours on 18 meter kites, busting 20 foot jumps over the official boat, guys doing 25 knots on the reach. (Johnny) Heineken’s GPS hit 28 knots that day. At the same time, the catamarans were sitting still, not flying a hull and the 49ers were parked. 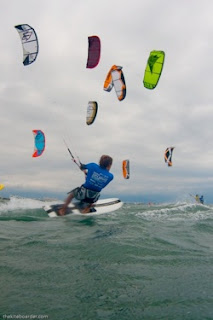 The advantage that kiting has is not just that the kite is higher but we can fly it around - to get it planing in four knots of wind, you do a power stroke and now the kite is doing 15 knots, loading the line, you have 15 knots of power in apparent wind on a kite. No-one seems to understand that. Even talking to America’s Cup guys - rocket scientists - they can’t seem to understand that this is what’s happened to this sport, that this IS the leading edge.”

As for the youth path in the sport, Gebhardt says that already the equipment has evolved and he predicts that within a few months, the federations involved will take the best instructional systems and begin to re-write the book.

“Everything will get better, manufacturers will further improve equipment as now the money and interest in the sport is going to come from the industry. It’s currently 10-1 in participation compared to windsurfing, and in the US, it’s 100-1, at least. It’s so easy to make kiteboarding gear and it’s so easy to learn.

For kids learning to kite, within six months they’ll probably be good enough to do World Cup freestyle and it’ll be even quicker for kids who come up through the dinghy/windsurfing programs as they’ll already know how to race - they’ll be the ones putting serious pressure on the guys at the top.”

Meanwhile, what does Olympic limelight do for the sport of kiting off the racecourse? 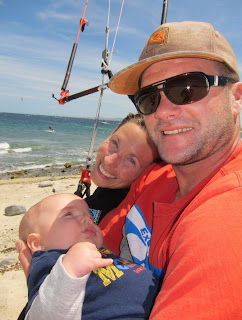 Megan O’Leary and Ian Sanders own Exotikite kite school in Los Barriles on the southern Baja peninsula. O’Leary is ‘beyond thrilled’ that kiting will be represented in the 2016 Olympics.

“It’ll be huge for the sport and will make it undeniably mainstream and approachable,” she said.

It’s already pretty mainstream in Los Barriles, a retirement community where the average age is much higher than most other kiting destinations and some 80% of her students are over 50 years old.

“Many of them have lived here for years, either windsurfing, or just here because they love it, and in the past three years have to decided to kite,” O’Leary said. “Really, anyone can do it!”

And it’s not just a guy-thing. In the past few years she’s seen the ratio of males to females even out at about 50/50. Many women learning to kite at Exotikite have never windsurfed and have no desire to. O’Leary cites that the relatively quick progression from complete beginner to kiteboarder is attractive, as are the improvements in equipment such as the total depower and safety release kites. She knows that many former die-hard windsurfers have transitioned completely to kiteboarding, especially the older crowd, as believe it or not, kiteboarding is much easier on the joints and requires less strength than windsurfing.

"About half the windsurfers I see are adding kiting to their quiver of water sports, in addition to those who purely want to kite, she said. "It’s easier to learn, you need less wind and it’s so easy to travel with, plus the gratification of learning comes much sooner, which makes it attractive to someone on vacation for a week with limited time to learn."

This I can attest to: during the BVI Spring Regatta and Sailing Festival a few months ago, I forfeited a day of sailboat racing for a few hours of kiting in the most exquisite blue - flat - water off the windward side of Saba Rock next to the Bitter End Yacht Club. It was comparable to kick-ass powder day on a snowboard. 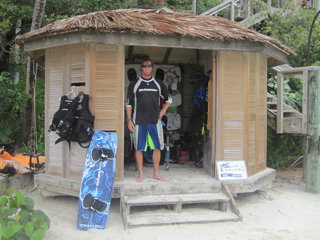 Scotty Allerton has run the kite school for the past nine years at BEYC, and agrees it’s much easier for people to learn to kite than windsurf, “There’s no comparison for learning, and it’s perfect in the steady trades that we enjoy here. We get a lot of people who arrive on a boat with their kite gear on board, it’s just so easy.”

It’ll just take time and education, concludes Gebhardt, to get people up to speed with kiting and what’s happening at the racing level. Utimately, he says, the best kiters will be the guys who come out of windsurf racing, as they know about sailing and racing.

“I went through this with windsurfing way back when everyone tried to say, “This is not sailing”, yet everybody who I have gone to the Olympics with over the past 20 years in sailing has windsurfed, from John Kostecki to Mark Reynolds and Charlie Ogletree. Now, alot of them are kiting.”

Like it or not, kiting is the revolution that windsurfing was in the ‘80s. Where it’ll be by the time 2016 rolls around is anyone’s guess, but I know I’d like to be witness in Rio come 2016.

Posted by Michelle Slade at 11:36 AM 0 comments