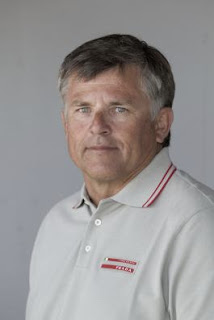 I’m writing a series of America’s Cup interviews that publish twice a month at Sailing World Magazine/Online. On this blog I’ll post the longer version interviews after they have published at SW.

The following is the first in the series that published in November - a chat with Steve Erickson (USA) Sailing Team Manager, Luna Rossa.

SE: We got the boat in the water and it was actually pretty exciting. It sat on a buoy all night, the first AC 72 to ever do that, which was also exciting. We got a little camper and parked it out front. The boat captain said,”We don’t want to leave the boat out at night because a lot of drunks come by at 5am (Friday/Saturday morning) and you could tell they just wanted to get on it.” So, yeah, that’s a bit of an issue!

We did all the tuning of the rigging for the wing, which you can’t do on the hard because the tarmac is uneven so the boat sits on its dolly uneven so none of the shrouds load evenly - all that has to be done in the water. There’s a lot of rigging work involved, a lot of drops being made…and unmade, and the engineers testing the loads.

How are you going to take the first steps?

SE: This week is pretty light, the guys will be doing some work on the boat and we’re going to tow test it either Wednedsay or Thursday - you literally tow it behind the RIB and load the boards and the boards load the hull, and cutting to the chase, it may have been why Artemis’ 72 broke - they were in that mode of tow testing their boat before they went sailing it - a pretty major beam broke and it happened that day so that’s the mode we’re going into - structural testing as it goes through the water. Then we’re hoping to sail it Friday or Saturday. 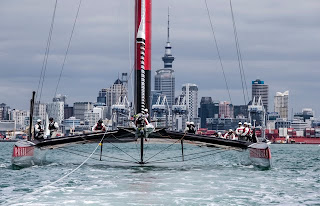 Testing of the boat is happening independent of anything ETNZ is doing?

SE: We’re not going to get involved with Team NZ for a good 2-3 weeks. We’ve got a lot of things to do just to get our boat sailing, tuned, get it safe - we wont even have a full sailing crew on the boat until next week. If we go sailing this week for testing, it’ll be half engineers and a few of the sailors and grinders and you step gingerly.

Who is going to helm initially?

SE: Franck Cammas is here helping us with that, mostly because he’s a person who has a lot of big catamaran experience. He’ll steer early on and the rest will play out over the course of our time in NZ.

How do you guys plan on getting around the Protocol ruling that you can’t ‘observe’ anything useful for design or performance in sailing, when you’re out there training with Team NZ? 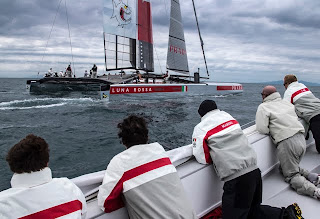 SE: That’s Cayard’s interpretation and I don’t want to get into legal speak. I hear a lot of people talk about what you can and can’t do - all I can say is that we - with ETNZ - are going to race by the rules while we are here. The Jury has made a decision in that regard and we’re going to abide by that. Stepping away from that a little bit, it’s not that different to what we’ve always been doing - going out and racing and setting up intra-team scrimmages on the race course. Having observed ETNZ the past week - they’re pretty much out there racing around the course - they’re setting up buoys, a start line, they’re going through all the maneuvers. I’m sure they’re systems checking for their second boat and somewhat getting ready for us. But, we need to go structure test our boat and get our systems up and running, our crew understanding how the systems work, get that crew coordinated. You could go sail another version 5 boat and you’d be a good 2-3 months getting the crew in sync. Without getting too far ahead of ourselves, we have a lot of work to do with our boat before we go scrimmage with ETNZ.

Is your boat and ETNZ’s going to be that different at the end of the day?

How are your guys feeling about sailing the 72?

SE: Excited. It’s a cool deal. Look at ETZ - they’re on day 14 or 15 and doing well, ripping around the racecourse and its pretty neat to see.

SE: (Dagger) boards up and boards down is 30 to 45 seconds of solid grinding by four guys. A couple of minutes later you get over to the other side of the boundary and you do the whole exercise again. When you used to see a good heavy weather jibing dual on a version 5 boat where grinders were grinding hard constantly squaring the pole, that’s basically where the energy is going - it’s going to be put into raising the new board. (Note: board is about twice as tall as a guy standing on the net)

What did you learn from Oracle’s crash?

SE: It’s unfortunate - we take it real seriously. We’re putting together our emergency - we had one from the 45, we grew it a little bit for the size of the boat but this was a reality check as to just how uncontrolled it is, how people seriously get flung off the boat, and how there’s just no-one left on the boat to help anymore.

What we’re hearing from the Oracle guys is that you’re not going to right one of those boats. We can believe that. So then, it’s going down the list of what do we do if we don’t right it. You cut away, there’s pieces, I guess that was the other thing that resonated with me is just how many pieces to the incident - from the pieces coming off the boat to the people involved at the scene - people getting off the boat, people trying to lend a hand etc. the Coast Guard - there’s lots going on out there in the ocean and that, I think, is going to be the piece to manage in the event that this happens again.

How are you preparing your guys for that kind of situation?

SE: Stating the obvious, there’s the personal gear that the guys are wearing - the helmets, lifejackets etc. There are issues that get talked about, like there are members on the team who are firm believers in “I’ll never wear a jersey over a life jacket because I want to be able to get the life jacket off if I get caught under the net and I have to be able to literally swim down to get out.”

But, the guys are getting into wearing armor (like free-ride armor for dirt and mountain biking), knives that work and appropriately placed on your body where you can get at them, and breathers - little 30-second air modules. We have a paramedic out on the water, which is nothing new. We’re planning to get together with ETNZ and I can tell you we’ll be there for them if they need our help and they’ve put their hand out in similar fashion. 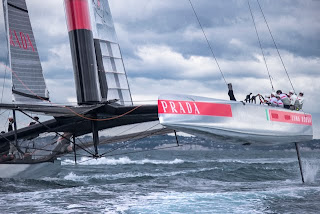 So, at the end of the day, does this really feel like going sailing?

SE: Having done the Round the World Race, this is just bringing the Southern Ocean to the Hauraki Gulf and San Francisco Bay. It’s yachting and not entirely new to everyone. What’s different about it, as we always used to joke, is that in the America’s Cup you get to go home and take a hot shower. Even as traumatic as it was for the Oracle guys and fortunately no one was hurt, they did in the end go home and have a shower that night. People racing round the Southern Ocean and around the world sometimes have to deal with issues for days if not weeks on end - a mast down and Cape Horn weeks away, for example.

Is the entire Luna Rossa team in NZ & what are you doing with the 45s right now?

SE: Everyone has been here since after San Francisco in August. The 45s are on the ship arriving middle of November and training goes on. We’re getting ready for the Italian events next spring so they’ll have to go back end of February so that gives us something to do on our down days with the 72. There’s a lot to be learned from having any small boat like that for training and starting.

You didn’t perform too well in San Francisco this summer?

SE: We put a different guy on each boat so both Iker Martinez (helmed the Swordfish) and Xabi Fernandez (trimmed on Piranha) are probably way far ahead than they would have been if they hadn’t done that event. They understand now what San Francisco is and the boundaries are, the different umpire systems, and catamaran sailing. That was the investment. Stepping back, my recollection on all those events is that you almost look at what team prepared the longest and hardest leading into the event and it paid dividends for those teams. We were at the events 10 days early in Italy last year and it showed. Oracle sailed for the month leading into the SF event and it showed. I think that Ben Ainslie put some hard work in between SF 1 and SF 2 and it showed. Not only did we not put as many days in, we didn’t put the same amount of days in with the same crew who had been sailing together all year. We knew that going into it.