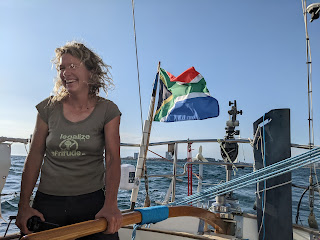 The only woman competitor in the 2022 edition of the Golden Globe, Kirsten Neuschafer has already sailed Minnehaha, her Cape George 36, some 15,000 miles in the past eight months. Over a call, Neuschafer, a 40-year-old professional sailor and adventurer from South Africa, sounded upbeat and cautiously optimistic about her upcoming voyage, and like her boat, solid in her ability to take on the grueling 30,000-mile Golden Globe race. We talked about her boat, the most important weapon in her arsenal that will carry her safely and – hopefully – expeditiously on her journey around the world.
Minnehaha is one of three Cape George 36s that Neuschafer looked at in late 2019 after she decided to enter the Golden Globe. She was searching for a boat in the North American market, because that’s where she was at the time, that would meet the event’s specific requirements:

Competitors must sail in production boats between 32ft and 36ft overall (9.75 – 10.97m) designed prior to 1988 that have a full-length keel with rudder attached to their trailing edge.

It was suggested that she look at the Cape George 36, which originates on the US west coast. Designed and built by Cape George Cutters out of Port Townsend, Washington, on paper the boat appeared to check all the boxes.

“It looked like it would be a heavy and sturdy sea-worthy but also fast boat,” she said. “I spoke to a lot of boat designers, racing sailors etc. and by looking at the numbers on paper, the consensus was it would be an ideal boat for my purposes.”

Apparently, Cape George 36 boats rarely hit the market however at the time three were available: one in Seattle, one in Newfoundland and another in Italy. Ultimately the boat in Newfoundland – Minnehaha - seemed the best option and from the moment she saw it, Neuschafer felt it would be a good choice. 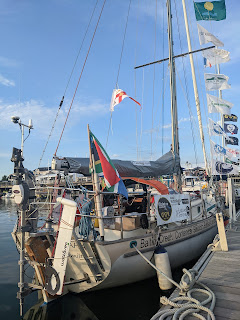 “I instantly liked the boat even though from the start I could see it was going to be a lot of work,” she recalled. “And Cape George Cutters confirmed that she had been professionally built in their yard which helped as they knew the boat.”

Neuschafer learned about the pitfalls she could potentially expect for a vessel of its nature and age (she was originally launched in 1988). Minnehaha is somewhat of a hybrid, with a fiberglass hull, a requirement of the race, with a wooden deck.

“The yard had done a lot of refits of old Cape Georges and most often what needed repairing were the bulwarks because they’re built of wood and bolted onto the hull above, they would often rot in the colder northern climates where they’d experience the freeze thaw cycles, plus the teak decks are an ongoing maintenance challenge,” Neuschafer noted.

By the end of 2019, Neuschafer was back home in South Africa raising funds to purchase Minnehaha. With that done, she returned to Maine to start the 2020 season working as a skipper for Skip Novak’s Pelagic Expeditions, but Covid soon hit shortly after her arrival, and borders quickly closed putting both a halt on her Pelagic job and her ability to get to Newfoundland to start work on her own boat. She waited it out in Maine for months until a friend identified a legal loophole which would enable her to get to Minnehaha in Canada. By then it was November 2020 and quickly turning into winter in Newfoundland.

Her original plan had been to sail Minnehaha to Maine to work on a refit. However, following a sea trial it was clear that the boat wasn’t in any condition to sail into the North Atlantic, let alone in winter. Neuschafer also had to be mindful of where she ventured given that international borders were closed, and she didn’t want to run the risk of not being able to get into any country.

Meanwhile, friends had come through with connections to help her haul the boat on Prince Edward Island (PEI), but she still needed to sail the short distance from Newfoundland before the seas froze over. It took weeks to leave, as one winter depression after the next passed the Cabot Strait. Local fishermen were looking out for her, and she relied on their wisdom before deciding to leave. 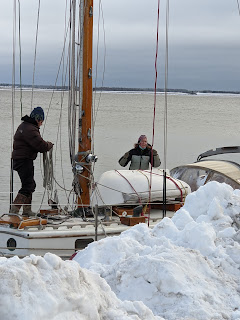 “It was either really stormy on a boat that wasn't entirely up to standard, or it was freezing conditions,” Neuschafer recalled. “The fishermen would tell me, 'Whatever you do, do not leave tonight because the moisture in the air will freeze anything it touches, like ice aloft, which makes your boat heavy in the rig and destabilizes it.'"

After some six weeks a short weather window enabled her to cross the Cabot Strait to PEI, making it in the nick of time as ice was already forming on the water. Minnehaha was hauled, which was an event unto itself. While a crane was available, there was not a truck or trailer on the island designed to transport a keel boat.

“Being as innovative as they are on PEI, the job got done with a lobster boat trailer,” Neuschafer recalled. “One young guy, Eddie Arsenault, who was considered a genius on PEI, told me, 'Relax, I wouldn’t be here if I didn’t think it was doable,' and he pulled it off.”

With the boat in a shed and safe for the winter, the refit of Minnehaha got underway. The PEI community picked up interest in the project and Arsenault quickly became her right-hand man, basically dropping his regular work to work with Neuschafer full-time on the massive 10-month project, which included rebuilding of the upper layers of the decks, the bulwarks and bowsprit.

Keeping in mind that all this was being done during an international pandemic, on a remote island, in the middle of a severe winter, sourcing materials was not exactly easy. But Arsenault proved to be incredibly resourceful.

of Douglas Fir to sell us the bench so we could build bulwarks out of it,” she said. “He’d recall where to find things he’d seen somewhere ten years previously which he knew we could use. What we couldn’t source he would machine himself.”

With this incredibly bright talent - a person who could do the same amount of work as four people in one day – Minnehaha was refit. By the time summer rolled around, Prince Edward Islanders had really
adopted her as their own. She had moved into new friends’ spare room right next to the shed where her boat was being worked on.

“The community support was otherworldly,” Neuschafer said with heartfelt gratitude. “I just don’t think it’s possible to find that kind of support somewhere else other than an obscure little place like PEI.” 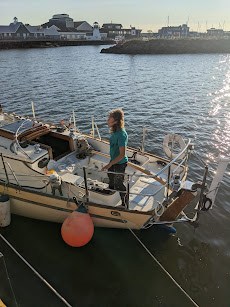 The community held fundraisers for her just to keep the project ticking over and while Neuschafer knew there would be big expenses like replacing the rig – the original rig was wooden spars - she had no idea the extent of the rest of the work and what it would cost.

“If it had not been for Eddie, the project would not have been possible,” she said. “He charged me half of what he would charge typically for his labor, and he put hundreds of hours in that he didn’t charge me a cent for. Where we could we repurposed material that he sourced which was much less expensive than it would have been otherwise, which was cool because the problem with old fiberglass boats is that they’re not recyclable and typically they become landfill once they’ve been discarded – I now have a repurposed round-the-world-boat. It’s nice to give the boat a second life because it’s a beautiful classic boat that may not have ever been recovered.” 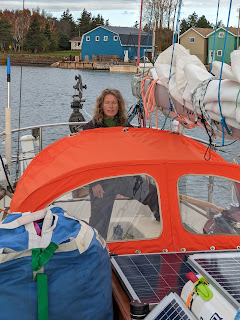 Neuschafer lived on PEI for almost a year, and once again, it was late in the season by the time she was ready to depart. Leaving in late December 2021, she was headed into the same kind of winter conditions as the previous year that she had arrived in - one depression followed the next.

After three weeks she realized winter wasn’t getting better, it was getting colder and ice conditions were near. She had already spent three weeks on the east side of PEI waiting for a weather window when a gap appeared, which was not ideal – it meant leaving in 40-50 knots.

She left PEI on a staysail and trysail in storm conditions through the Canso Canal, Nova Scotia, before entering the Atlantic Ocean. She spent one night in Fisherman’s Harbor, an obscure little fishing harbor close to Canso where the fishermen had all hauled their boats for the season. When she came into port, they let her know that she should call them if she needed help. She called the next day, requesting assistance to cast off so that she could leave to head into the Atlantic.

“They didn’t want me to leave, they said it was blowing 40 knots inside and that it would be blowing 50+ outside, 'Are you sure you want to leave?' they questioned me. I said I had to leave because if I didn’t, I’d never get out there. I did leave and sailed non-stop to South Africa, making landfall in Cape Town.”

It was a rough sail with winter conditions that didn’t really subside until she was well east of Bermuda, but Minnehaha proved her worth and it was an invaluable experience to have sailed the 7,700 miles
from Nova Scotia to Cape Town. After three months at home in Cape Town, she sailed another 6,300 to the Azores where she stopped to haul the boat one final time to anti-foul. From the Azores it was another 1000 miles to the Bay of Biscay to prepare for the start of the Golden Globe. 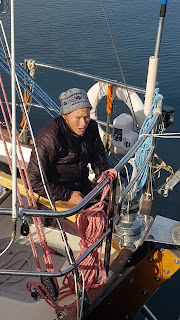 “I’ve already got almost 15,000 on Minnehaha, it’s been a huge blessing to have already spent so much time sailing her,” she shared. “Leaving from Nova Scotia for South Africa was hard beating conditions while leaving Cape Town was light, running conditions all the way to the Equator. On that stretch I got to experience different conditions sailing in light winds and using spinnakers and code zeros.”

She feels like she’s encountered most of the conditions she could encounter on the race except the big heavy Southern Ocean conditions, which she had only had a little taste of approaching Cape Town.

“The Southern Ocean makes me a little nervous, but I do really trust the boat. If we don’t do well, it’s me!” she laughed.

In hindsight, she couldn’t have chosen and refitted her boat in a better way. She knows Minnehaha so intimately at this point and has developed a special relationship with the boat.

“I love the boat; I’ve put so much of my personal energy into it,” she said. “There’s hardly a nut, bolt or screw that hasn’t passed through my hands. I had lots of tools and materials left from the refit which were fantastic – correct sized - spares to take on board.”

While she never really considered changing the name of her boat, she deferred to the advice of the local northern fisherman. 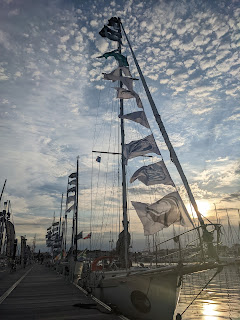 Now the time has come and she’s almost underway. Her biggest joy, Neuschafer shared, will be when she’s out on the ocean.

“Getting offshore, away from traffic and into the trade winds when it gets warm and the weather is nice and consistent, and leaving all this behind – it’s hectic here at the docks in the South of France, the start line will be intense, so to finally start, break away from all of this and find yourself in your world and living to your own rhythm again. That’s going to be really rewarding.” - Follow Kirsten Neuschafer: https://kirstenggr.com/

Posted by Michelle Slade at 7:54 AM 0 comments