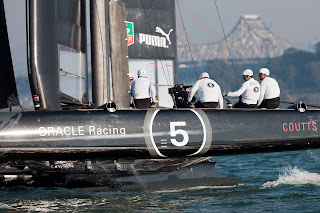 Enthusiastic sailors and boaters around the Bay Area have finally been able to get their feet - and more - wet with the America’s Cup, as a group of yacht club volunteers take on specific training that will certify them to become on-water volunteer marshals for the 2012-2013 events.

This weekend is the second training course for Cup volunteers from Bay Area yacht clubs to take a US Sailing safe power boat handling course and get recognized by the US Coast Guard and certified by NASBLA (National Association of State Boating Law Administrators), a license that volunteers maybe required to have to marshal on the water for AC34 events.

“We ultimately need to about 200 marshals we can use for 2013 - those people will help us in conjunction with groups like the Coast Guard and the Neptune Coalition,” said John Craig, Principal Race Officer for the 34th America’s Cup.

The training course has been promoted through the America’s Cup Yacht Club Alliance - a group of yacht clubs in the Bay Area located on the water around the Bay who have come together to support the America’s Cup events with the provision of volunteers and other assets such as marshal boats.

Last weekend was the first training course, held at Cal Maritime in Vallejo, and Craig expects that a few more will be held later this year to ensure he can pull together a group of 200. “We wont expect those people to be out every day during events,” Craig said, “but we need a pool because we think we need to run 60 people a day.”

As part of the weekend-long course, the Coast Guard Auxiliary makes a presentation on how communications will work from their end, to the police/authorized enforcement boats, and from there into AC marshal boats which will help maintain the race-course.

There’s also an environmental session to ensure AC adheres to best boating practices with a speaker on endangered species and how to identify those as well as discussion on best practices when fueling etc.

The final component of the course is learning how the ‘box’ is defined and the different areas the marshals will be to maintain the course, or the ‘box’, where the boats will be etc., which Craig delivers himself. 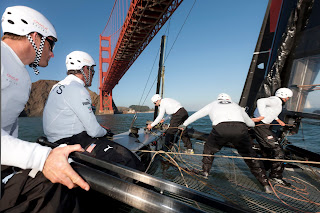 “Last weekend went great,” Craig said. “We’re excited about this and the Coast Guard’s really been supportive. A lot of the people have some really good skills already so it’ll be interesting to get feedback to see if people learned a lot or a little.”

Aaron DeZafra, a former Commodore of the Corinthian Yacht Club who attended last weekend’s course thought it was really worthwhile.

“Spending a lot of time on boats as a lot of us do, I was hoping not to be bored out of my skull and I have to say I was really, really pleased with the course. It was a lot of fun. I learned a lot of stuff that I actually didn’t know or used to know (LOL). We learned some good techniques for boat handling that I had not put to use before.”

A high point of the weekend for DeZafra was Craig’s presentation, “It was great to hear first-hand what the course was going to look like, what to expect from commercial boats, how we’re going to operate, and how we’re going to be scheduled at a high level.”

Roxanne Fairbairn, also a CYC member and on the Race Council, also attended last weekend’s course and commented that it felt like things were really beginning to happen. “We had over 40 volunteers from clubs all around the Bay so it was really fun to meet new people and a great way to start building this Cup community here.”

This coming weekend there is another course planned which is sold out with 50 participants and a waiting list of 27. Volunteers are paying their way - it’s a $50 fee for the two-day course. If they bring their own boat there’s a 50% discount - some yacht clubs have people taking the course using their respective club boats.

Craig thinks that if the volunteer training is a success, hopefully it could be used for things other than the Cup such as clubs using the training for their own race committees. Either way, the Bay Area will have a well qualified pool of on-water volunteers to draw from for all kinds of future on-water events. Not a bad thing at all.

The final version of the America’s Cup Event Authority’s (ACEA) Sustainability Plan published today, all 51 pages (http://www.americascup.com/en/Latest/News/2012/2/AC34-Sustainability-Plan-released/). It’s just one of the ELEVEN implementation plans that are part of the Host City Agreement with the City and County of San Francisco. Like most everything else AC34 it’s aggressive but one that looks certain to leave a positive legacy for San Francisco, as well as for sporting events in general. 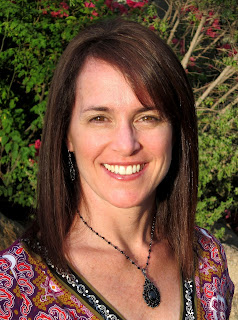 Jill Savery, ACEA’s head of sustainability, is leading this relatively new area of sports and sustainability for AC34. Her bio’s impressive.

The 39-year old Olympic gold medalist (synchronized swimming, 1996, Atlanta), 8-time World Champion and International Hall of Fame Inductee, has a Masters Degree in Environmental Management from Yale and recently returned to the US after leading the London 2012 Olympic and Paralympic Games sustainability work program of a London-based NGO. She has served as a co-opted Expert to the Commission for a Sustainable London 2012.

Savery explains that what ACEA decided to do was to narrow the broad scope of what was feasible to work on into five themes. The Plan demonstrates how AC34 delivery organizations intend to achieve sustainability objectives via these five themes:

Inclusion: providing an inclusive and welcoming event experience plus maximizing legacy benefits for the City

“This process is becoming international best practice for major events and hopefully allows people to get their hands around what it means to be sustainable with an event,” Savery says. 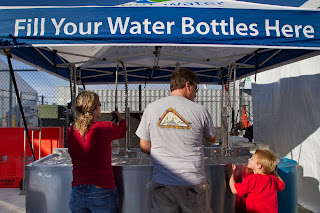 And she knows tangible results are key.

“It’s easy to have lofty goals and make commitments, but how do you follow through? On a basic level, we begin by working in areas that are in our direct control, for example, any vendors we contract with, we let them know what our guidelines are.”

The most tangible of these guidelines is a no brainer for a city already known for its stringent environmental policies and procedures - AC34 will be the first event in San Francisco to prohibit single-use plastic bags and plastic water bottles at its event sites throughout the City.

“We can influence and communicate to spectators that things are different in San Francisco and to bring their own bottle for water because they certainly wont be able to buy water in plastic bottles at the venues we control.” 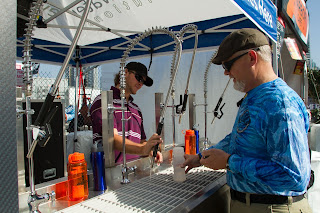 Instead, the event will offer up a water refilling station like at the America’s Cup World Series event in San Diego. According to that vendor, he poured 1300L of water into reusable containers - for free.

An example of projects being pursued on a more complex level under the Plan, her team is working with a group of City departments to foster electric vehicle infrastructure and to figure out how AC34 supports the City’s objectives there.

For cynics of accountability, Savery plans to develop a suite of KPIs - Key Performance Indicators - to measure, for example, energy use and gas emissions but also items like the number of activities used to engage the public, all which will be reported publicly. It’s a new model of reporting for events that she’ll use in tangent with the Global Reporting Initiative (GRI), another new tool for sustainability reporting to an event.

“There’s not a day goes by that there isn’t an event of some sort in San Francisco and we’re hoping what we learn we can leave for future events,” she says.

When it comes to the reality of sailing as a ‘green’ sport, between looking at how modern boats are produced and the amount of energy burned on the racecourse with support boats etc., sailing events are hardly green.

Savery doesn’t disagree but says it’s true of sports across the board. 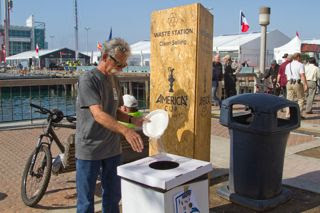 “As an industry we’re starting to look at how equipment is produced, events themselves, spectators traveling, the waste, etc. It’ll take a long time before you’ll be able to say the entire industry is sustainable, but the exciting thing is that we’re making a start,” Savery concludes.

NB: AC34’s Sustainability Plan is the product of public input and partnerships with many agencies including the City, the Department of Environment, SFMTA (San Francisco Municipal Transportation Agency), SFPUC (San Francisco Public Utilities Commission), the Port, ACOC (America’s Cup Organizing Committee) experts like David Lewis from Save the Bay, the OEWD (Office of Economic & Workforce Development), and the Mayor’s Office.

Jill Savery is from Concord in the Bay Area. She started her work in sports and sustainability about 10 years ago thanks to her passion for sports which will “never go away”, and passion for the environment and sustainability. After the past few years living and working in London, she’s thrilled to be working on these initiatives with the America’s Cup 34.**