Oracle's Tactician Happy To Be On Home Turf for AC34 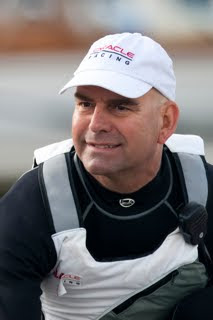 John Kostecki is the sole American on the American America’s Cup sailing team, in an event that is being held in America for the first time since 1995. Fortunately, the renown tactician’s career successes more than make up for the absence of fellow countrymen on the Oracle Racing team.

I recently caught up with JK in a café near his home in Marin County. He arrived on bike, one of the creature comforts he’s been enjoying since spending more time at his Bay Area home. JK grew up sailing his parents Lido 14 - the same boat, by coincidence, that his boss Larry Ellison grew up sailing on. When he was 8 years old he joined the Richmond Yacht Club and its junior program. It was a great program for JK, and the club/junior sailing became a big part of his life. Later his dad graduated to a Cal 20 and the young JK raced on that.

Like most America’s Cup sailors, JK’s humble beginnings proved to be the foundation essential for his future success in the sport. He says, “I wouldn’t be where I am today without dinghy sailing. Every time I go back to it I really enjoy it. It’s probably the best way to become a better sailor and a fast way to learn as they’re so sensitive.”

Fast forward more than a few years…JK’s focused on the next 15 months and his job as tactician for Oracle Racing.

What does it mean to you personally to have the Cup in SF?
JK: It’s great - it’s even a little surreal. It hasn’t happened yet but it’s great for me, being from here. Every once in a while I have to pinch myself, “Heck, is this really happening, you know?” 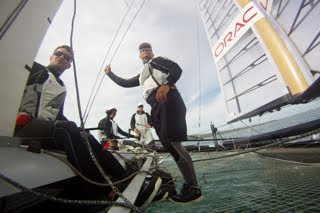 What’s changed in the role of tactician?
JK: With the AC45, there’s only 5 guys on the boat and it’s obviously quite demanding - we’d rather have 6 or 7 crew to do all the jobs. There isn’t a dedicated tactician per se - the helmsman is really the tactician and the rest of the crew contributes to the tactics - that’s how it’s mainly different to more traditional Cup boats.

What about equipment that you use to do your job?
JK: It all depends on what kind of racing you’re talking about - say Bay Racing - there really hasn’t been a whole lot of change - there’s a lot more access to weather information, tidal information - you can now download it to your phone - not huge changes.

But, you’re going to see a lot of exciting changes for this next Cup with equipment and electronics because of the way the boats have changed and the races have changed with the shorter courses. The last Cup with the trimaran and the catamaran were a stepping stone - there’s going to be big changes - stuff that’s being developed in-house. (Ed’s note: JK was clearly excited about some of this “stuff” that he couldn’t talk more about…)

How do you become a good tactician?
JK: Good question - sailing singlehanded boats on my own starting out - you really have to become your own. Growing up we weren’t a financially wealthy family so it was always hard for me to get even decent equipment - it was always below average so the equipment held me back so I had to make up for it in other ways. LOL! That’s probably the start of it all - how I learned to become a smarter sailor I guess.

What do you prefer - helming or being tactician?
JK: I enjoy both. The thing about being tactician that I like is that it’s a smaller area you can really focus on. Being the helmsman, a lot of the time you’re not only the helmsman but as the skipper you have ultimate responsibility for everybody on the boat. It’s a more demanding job. 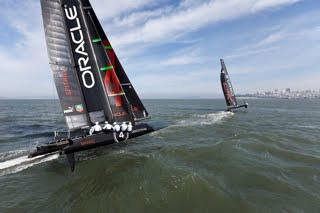 How interesting is the tactical game in the AC45 for you?
JK: With multi hull sailing it’s just a lot different - there are a few really key moments especially with the way we have these new courses set up. You really have to focus at critical times to get it right otherwise you can lose a race. It’s still fun and challenging - just a different game.

You’ll see tacking duels at times, like we had a tacking duel with Team NZ in San Diego - it’s not a conventional type of tacking duel but we probably did 5 or 6 tacks on that short course. That’s a lot of work and it’s slow. In a match race you can do it, like in that particular race, Team NZ and ourselves wanted to stick close together and that ended up happen, especially as we all get more comfortable with the boats.

There’re a lot of young guys in the AC now - you must be seeing some great talent?
JK: I think it’s great. For sure there needed to be a change to get more young people involved in the sport, particularly in the America’s Cup. It was turning into an older guy’s sport. The change to the boats makes it quite obvious that young, stronger people need to get more involved. It’s going to bring the average age down a fair amount and it shows on all the teams.

Everybody has younger guys this time around - people coming out of the Olympics. We have three guys who are doing Olympic campaigns now and a few other guys who have just come out of the Olympics. It’s a great learning opportunity on both sides and it really pushes you too. It’s great to have that extra push. Just doing the A-Class stuff with Nathan (Outteridge) and a bunch of the younger guys in January in Australia - it makes you work harder trying to achieve another level.

Can you recall a time when you’ve been especially challenged as a tactician?
JK: Yeah - you always make errors! I’m a relatively conservative tactician. I always try to rely on other aspects - boat speed, crew work. I’d have to say some of the offshore sailing that I’ve done has been challenging. We had some races in the 01-02 Volvo when I was skipper on Illbruck where I would have to say at times we made some big mistakes. It really gets tricky because it’s a big team and stuff got spread out over the internet - we all had high expectations and so a few of those moments stand out. It was hard to swallow those mistakes sometimes. But that’s the Volvo - there’re some incredible highs and incredible lows - I remember both!

Are you following the current Volvo?
JK: Oh yeah. But, for whatever reason it seems that the Volvo is not as popular as it used to be. People really aren’t following it as much - generally seems like people have lost interest. I’m a little disappointed. The only thing I can really think of is the new course - less southern ocean and less traditional route. Could also be the worldwide economy. Seems like there’s less involvement and it’s still expensive.

Do you like ocean racing?
JK: I do - I’ve enjoyed that part of my career. I don’t see myself doing a whole lot more but I really enjoyed it. It’s just different. Just like multi hulls are different. I really enjoy learning new things - it’s how this game is now - I’m constantly learning, especially with the last Cup and the trimaran. In that sense I enjoy the offshore sailing. I didn’t think I would but ended up liking it. Every once in a while I think, ‘Man, I wish I was out there in the middle of a race,’ and other times I think, ‘God, I wouldn’t want to be out there in that race’ 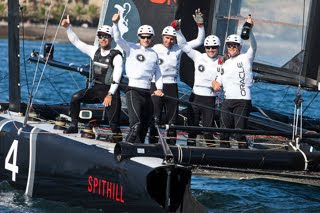 Do you like your job?
JK: Yeah! I really do.

What about the people you work with in this game, like Larry?
JK: Absolutely - like I said before, it’s great to meet different people and learn from others - I really enjoy that part of my work.

What’s been the pinnacle of your career - pick one!
JK: For sure the Olympic sailing is a lot of fun. That really developed my sailing level. I think it really got me into professional so I’d have to say Olympic sailing. It really develops more of a routine on how you go about sailboat races.

What does your day-to-day routine look like?
JK: It’s always in the gym in the morning whether it’s a race day or not. Either a big day in the gym or a race day training routine in the gym which gets you physically ready. Then we’re into planning meetings or debrief meetings on racing or training. That’s normally a big chunk of the mornings then normally sailing or racing in the afternoons. We have Phillipe Presti who used to work with Jimmy at Luna Rossa - we have him working with us on tactics, strategy and starting - now he’s a full gambit coach - he’s like a Rod Davis for us.

Do you do any other kind of sailing?
JK: I’m actually pretty busy - it’s always a balance with family - my kids are 4 and 1 ½. It’s challenging. In this day and age I’m trying to stay with multi hulls as well because the mono hulls are a lot different to the multi hull. I don’t want to be going back and forth and try to relearn habits - you relearn everything that you’ve forgotten then go off and sail another boat. It’s nice to stay with multi hulls at this stage of the game. I’m a little wary of doing too much mono hull sailing. You can go out and do a race or two or a regatta or two, but you can’t really do a lot of sailing just because the timing and everything is just so different.

Plus, the AC45 are really cool boats. I’m going to have to say there aren’t too many better boats than an AC45 out there to sail right now. They’re really nice boats, well designed.

What’s your favorite part of a campaign?
JK: Pretty simple for me - my favorite part is the racing. Racing’s fun and I really enjoy it. I also enjoy the training side. It can still be tedious - when you’re trying to develop speed you still have to go out and test equipment etc. - that part of it really hasn’t changed too much. As long as you’re involved and understand what’s being tested then it’s still pretty fun. You’re learning how to make the boat go faster.

If you weren’t sailing what else would you be doing?
JK: LOL! Riding (his bikes). I don’t know - I enjoy the financial markets - always keep a close eye on that. It’s similar to my role in sailing because it’s quite tactical there’s a lot of strategy involved. I enjoy that and would probably be involved in some aspect of that. Right now it’s very busy, it’s only going to get busier. It’s only just around the corner.

When are you going to throw your 4-year old on a boat?
JK: She’s been on a boat - not here but my wife is from a sailing family - Anne Marie - Dirk De Ridder is her brother. They’re a big sailing family from Holland so our daughter every summer goes back they go back to sail with the grand parents. Eventually we hope to move back to Marin and get a boat and have more of a normal family sailing atmosphere. LOL! 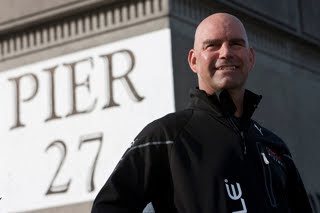 * John Kostecki is the only person in sailing to hold a “trifecta” of the sport’s most elite events: an Olympic medal (Silver in the Soling class, Seoul 1988), a Volvo Ocean Race win (skipper and helmsman of German yacht Illbruck in 2001/2002), and victory in the 33rd America’s Cup (tactician BMW Oracle Racing).