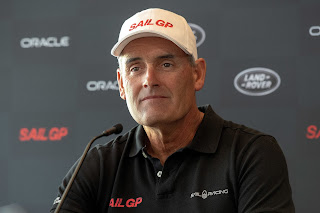 Russell Coutts, CEO of SailGP, is in San Francisco this week for the 2nd event in the SailGP global racing series, and the program's first US event. SailBlast was curious to learn more about aspects of the event which are somewhat unique ... and what it is that keeps the Olympic gold medalist and five-time America's winner in this fast-paced game.

SailGP has forged a relationship with US Sailing - how did this come about and how do you see maintaining this relationship over the long haul?

RC: It’s logical for SailGP to partner with US Sailing as we have a lot of common interests. We both want to promote and grow sailing at the grass roots. The nationality rule that we have adopted for SailGP means that the US team must use US sailors and that in turn means the US Team needs to have a pathway for young sailors to develop their skills such that one day they can sail on an F50. It’s our hope that by presenting an exciting platform with the SailGP Championship, it will inspire more young people to become involved with or try sailing. Our goal is to create a consistent platform of annual events, returning to the same venues each year.

During our broadcast and on our Event TV within the Village we will be showcasing US Sailing programs during our US events which will hopefully help to create more awareness. We also have a number of aspiring Olympic athletes involved in the US SailGP team and they should be marketed to become great ambassadors for the sport, especially for young sailors here in the US.

What do you think is the coolest thing about the F50? 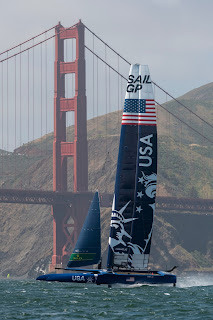 RC: The fact that teams are each racing in the same high tech boats and
the data coming off the boats is in the public domain is a pretty cool feature. It means that the crews can analyze each others performance and compare the different techniques they are using to sail the boats. That should accelerate the learning curve for all the teams. I suspect the teams will not end up sailing the boats the same though. The play book that one team adopts may not suit another. But it will definitely give us an insight as to why one team might be performing better than another.

Of course we made the boats one design because we want to identify the best sailors rather than who has the best technology and we also wanted to save costs. But the interesting thing is the rule doesn’t stop our central design team from developing the boats, in fact it’s quite the opposite. The rule is simply that each team must use equal equipment as supplied without modification. We are currently building new wing sails to be used for the 2020 season. We’ve just introduced a new flight control system on all of the boats for the San Francisco event. And we will likely build new foils to be implemented in 2021. Whilst the current F50’s are capable of exceeding 50 knots I see no reason why they couldn’t be reaching 55 knots or more in two or three years time.

You’ve been around the elite sailing game your entire life – what keeps you inspired? 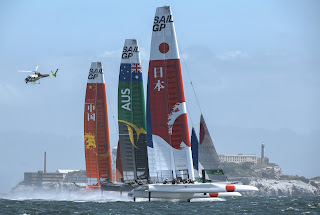 RC: It’s never become boring for me because I’ve always kept an open mind and taken on new challenges. It’s an exciting time to be involved in sailing. I’m pretty involved in some youth programs in New Zealand and we are seeing growth in a few areas for the first time in quite a while. These new forms of sailing are exciting and inspiring the youth. It’s become cool again.

Of course sailing can and should be enjoyed in all forms and at all levels. But having a top professional arm of the sport, that’s well marketed, with a high quality broadcast tailored towards modern viewership habits, involving national teams in a consistent, year round, annual series with defined pathways for youth to make it to the top has been a missing element in our sport. 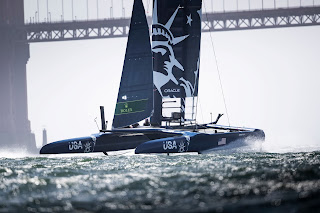 Check out SailGP in San Francisco this week: www.sailgp.com

Posted by Michelle Slade at 3:41 PM