Fiona Wylde - Doing it Differently and Doing it All 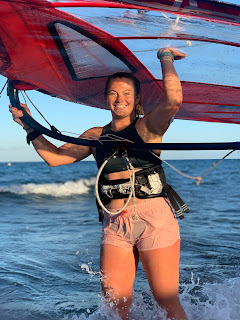 Not long after she signed with Starboard as a pro athlete in stand-up paddle boarding, Fiona Wylde was diagnosed with Type 1 Diabetes.  She was 18. “Here was my chance to be a professional athlete and I was so excited. But I did one race and was in second the entire race, it was super long and in the last mile I just tanked. It was a big shift for me.”

She started on insulin and three days later flew to Europe to race for the first time in the European Championship tour in England. She won the race.

After many years as a SUP athlete in both paddle racing and surfing, Wylde, 24, is switching her attention to the iQFoil (Innovation Quality), a new class for the 2024 Olympic Games. She’s got a ton of experience behind her, and a healthy appetite for competition. At 5’-2”, she’s one of the tiniest people I have ever seen on a windsurfer, let alone on top of a windsurfing foil board.

Born in Port Townsend, WA, her first introduction to the water was on her parents’ sailboat, Bryony, a 36ft gaff cutter on which Ellen and McCrae Wylde ran sail charters (Fiona’s mum has always had a business making dodgers for sailboats). While Fiona was not much more than a toddler, Ellen and McCrae began to spend time in Los Barriles, Mexico, on the east cape of the Baja peninsula.

Pretty soon, Fiona’s routine became Port Townsend in the summers and Baja in the winters - she’d play on the beach while her parents sailed and windsurfed and occasionally McCrae would sail her around on the nose of his board until she was old enough to be on her own gear.

“Windsurfing for me was our family sport – it’s what we did together and it’s how it all started for me,” Wylde said, with her characteristic enthusiasm. “I would be asked what I did after school, and I would say, “I go windsurfing!”.

The Wyldes moved from Port Townsend to Hood River, Oregon, and by the time she was 10, she was already an accomplished windsurfer competing alongside her dad.

Wylde laughed, “I couldn’t water start and I couldn’t jibe but I could go fast in a straight line – they let me do a couple of races when I was 10 and that became the thing that I looked forward to the most – windsurf racing.”

Through to middle school, Wylde would attend school until mid-November when her parents would take her out, telling school, “She’ll be back first week of March, what does she need to know?” She spent 12 years attending Mexican school, making life-long friends with local kids, and becoming fluent in Spanish.

Wylde competed in windsurf racing into her mid-teens but also joined a kids’ SUP team, training twice a week at 6:30am, a big deal for a bunch of teenagers, she laughed.

“We weren’t sure why we were doing it as we were a bunch of windsurfers, but I really liked the physical, technical and training aspects of it. Windsurfing is technical but when I was younger it wasn’t very physical so for me. SUP was a cool balance between the two sports.” 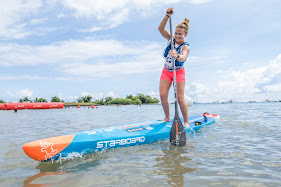 16 was a pivotal age for Wylde – she competed in the Gorge Cup windsurfing slalom series in Hood River for the first time and beat everyone of any significance including her dad.

“While just a small series, the caliber was really high, so it beating everyone was significant,” she said.  Wylde also competed that year in the Gorge Paddle Challenge for the first time, a World Cup event where the world’s best SUPers compete. She won.

“The combination of those two big wins reinforced my passion for competing,” Wylde commented. “I told my parents that’s what I wanted to do. I was already doing an online school program, so I didn’t need to physically attend high school which allowed me to travel and compete. I had the passion and for me competing was the direction it was all going.”

About the same time, Wylde learned to SUP surf and started competing in that, as well as windsurf wave sailing. She was a water hound, competing in some slalom, a lot of wave sailing, a lot of SUP surfing and a lot of standup racing, juggling the four different sports although her two main focuses were windsurf wave sailing and SUP racing. It was a unique lifestyle for a teenager and one that she successfully pulled off from 16-20, spending a lot of time in Hawaii and learning as much as she could about waves and surfing.

She won the Youth World Title in 2014 for wave sailing and took second in a World Cup Event in Hawaii in 2014 and 2015 where all the top pros were competing. She also competed in SUP racing, making podium at international events, and winning the SUPtheMag Breakthrough Performer Award presented at the annual SUP Awards. She was also winning at a plethora of other competitions across multiple events.

The hard work paid off - when she was 17, Starboard invited her to sign with them for the 2015 season. She’s been on the Starboard International Dream Team for SUP since then. That she wasn’t signed for windsurfing - Starboard was looking for a SU paddler at the time - really changed her career path.

After joining Starboard, she competed for another year on the windsurfing tour, but it was complicated for Wylde to compete in all four disciplines all at the pro level within a calendar year. She turned her focus to SUP surfing and SUP racing.

Not long after she signed with Starboard, Wylde was diagnosed with Type 1 Diabetes yet just some months later she won the women’s SUP Racing World Title. 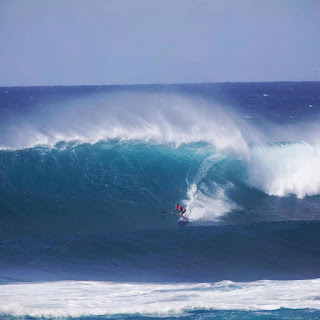 “That’s been my biggest accomplishment, the diagnosis of Type 1, and then going onto win major competitions back-to-back,” Wylde commented. “Physically and emotionally, it was a big step forward in my career as I had to jump start everything, including the mental side of competing. If you have a passion for something, you just have to work your butt off and pay attention. In my case I had to pay attention to my body, but I wasn't going to give up because I had a faulty pancreas.”

That same year she won her first SUP world title in SUP racing – a world tour with up to six events throughout the year – she also competed in SUP surfing and took second in that world tour series, and in 2019 won the European tour for SUP racing.

Wylde’s focus on SUP rather than windsurfing changed when the iQFoil became the new Olympic class for 2024. Wylde saw the equipment evolving, and the potential that Starboard would win the bid for the Olympics to supply that equipment. Her interest was seriously piqued.

“Windsurfing is something I have loved from the beginning, I have a long history of racing in it and really enjoy the technical aspect of it,” Wylde said. “When I learned foiling was coming in, I wanted to give it a go.” 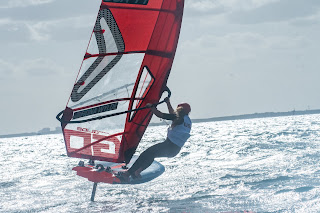 Due to Covid she hasn’t raced SUP this past year, although she’s kept her training up, so moving into the iQFoil class was a good opportunity to learn something new. This past fall she trained in Florida with US Sailing. Her experience with the iQFoil gear was limited, she hadn’t sailed on it with other sailors, and had never sailed course racing, only slalom, so learning tactics was key. Transitioning from a regular windsurfer to a foiling windsurfer had its challenges.

“You’re going a lot faster when you’re foiling so it’s been a steep learning curve, with the biggest thing being the different timing in maneuvers, and balance,” Wylde explained. “Of course, the crashes a gnarlier, too! However, I find it fun because not only are you trimming the board and your sail, but now you get to include the foil, which is an entire new dimension unto itself. It takes time to learn the response of the foil. I am reading and riding the water differently than if I was sailing with a fixed fin.”

For now, there’s just one other female in the iQFoil class contending for the US spot on the 2024 Olympic sailing team – Farrah Hall, the current U.S. Olympian for RS:X windsurfing.

“She’s definitely good!” Wylde expressed. “Initially there was no way I would have been able to beat Farrah but by the end in slalom I would win a few, she would win a few. In course racing she would mostly win but in the last few days of the regatta I was right behind her or getting her in a couple of races. The cool part about it is that she has so much experience and I’m on the same race-course as her – I learned a lot from her.”

Historically, as Hall concludes, windsurfing has had low participation at the elite level in the U.S. She thinks however, that the new class will certainly draw in more women.

“It's cooler, modern, and more fun, so I definitely expect to see more women try it out,” Hall said. “I think Fiona has a really good process and attitude, so she certainly has a lot of potential as a competitor in the iQFoil class.” 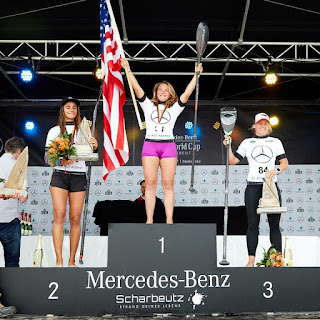 Wylde’s Olympic dream is inspired, and supported, by her family. Great Grandfather Cecil Irton Wylde represented England in the 1928 Winter Olympics in Ice Hockey, and her Uncle Peter Wylde, a professional equestrian showjumper, won gold in Athens in 2004. Wylde was there to experience his success. “I guess that’s where the Olympic effort started!” she laughs.

“My uncle Peter and I have an incredible relationship,” Wylde explains. “I visit him in Florida in between events and the biggest thing I take away from him is the hours are the hours he puts in – I watch the way he works and wonder how he accomplishes what he does. He has a passion for it and realizing that was an “aha” moment as I do that too - establish organization and routines.”

Wylde is still contracted to Starboard which for now is her job. In 2021 she plans to continue with SU paddling while also training on the IQ foil – whatever training camps she can go to and whatever opportunities there may be with US Sailing, sailing with other people, she’ll be doing it. Her goal for this year is three international regattas between the disciplines. Going into 2022-23, it will be windsurfing all the way for Wylde.

Her daily routine, whether in the Gorge or Baja or Hawaii, is structured: dry land training in the morning for both SU and windsurf, then paddle and windsurfing every afternoon. Sometimes she’ll do all three in a day, or alternate dryland with a paddle, or dryland with a windsurf.

“It’s all very well to live in great places but it’s also distracting to a routine and trying to incorporate schoolwork. My time on the water is my time to train, it’s not playtime. I go out on the water with specific ideas and goals for that session.”

Her coach Steve Wrye first met Fiona when she was in middle school and ran for the Hood River Middle School program and has been working with her since.

“Even at 13 years old she asked all the right questions and spent hours working on her running mechanics,” Wrye commented. “Fiona's strength is she is just an amazingly gifted athlete. I am beginning to think that she now may be the best all-around water woman in the world. If not pretty damn close!” 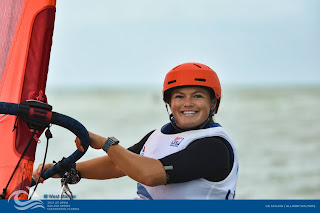